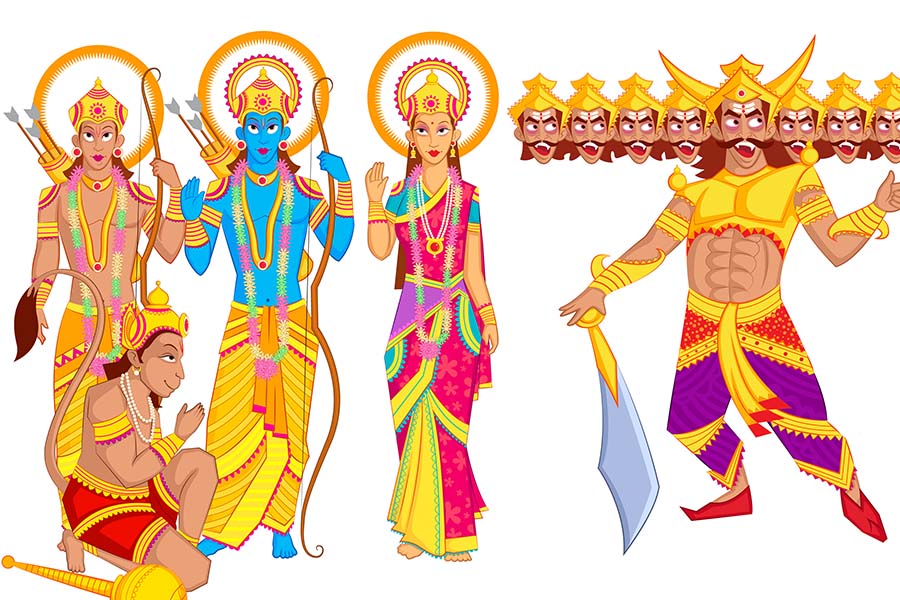 Lord Rama is famous as marayada purusottama, the personification of righteousness. So how can his actions be controversial? Are we missing the broader context that can enable us to see the righteousness hidden behind these commonly made allegations against Lord Rama?

This incident is indeed heartbreaking.

After rescuing Sita, Lord Rama, who never doubted Sita’s undivided love for him, anticipated village gossip in doubt of her chastity; after all, Sita was a captive of Ravana for one full year. Thus with a heavy heart, Lord Rama had asked Sita to undergo the fire test. But in spite of being proven through the fire test, some ordinary citizens still did not approve of Sita’s chastity.

Lord Rama set the highest example as a king: Lord Rama, like most political leaders of today, could have neglected or silenced his citizens’ criticisms. But he chose to act as an exemplary leader and thus gain the people’s trust in order to serve them properly. This meant acting according to the cultural norms of the time i.e. to send Sita away. This, however, does not mean that Lord Rama did not love his wife. Ramayana devotes four chapters describing Lord Rama’s intense feelings of separation when Sita was kidnapped. He was as devoted to her as she was. But we cannot comprehend the spirit of sacrifice of Lord Rama because most of us think and act in a self-centered way. And we are not kings; we cannot imagine the responsibility of a king towards his citizens. Lord Rama thus ruled Ayodhya for the next 10,000 years in an exemplary way while crying in separation from Sita.

Sita did not resent Lord Rama for his decision: On hearing the decision of Lord Rama from the distraught Lakshman, Sita was initially devastated. Soon she regained her composure and understood the heart of Lord Rama. After all, she was not a timid, emotionally abused woman who felt forced to act as per her husband’s line of thought. Rather she was independently thoughtful and knew the complexities of kingly duties. She thus accepted his decision gracefully as the inevitable twists and turns of life, on which we have little control.

Lord Rama did not ‘abandon’ Sita: The word ‘abandon’ is not the best word to describe Lord Rama’s decision in sending Sita away. Sita’s life in the forest was not like that of a single mother in the modern world. She did not have to scour for food, clothing and shelter; they were well arranged for in the hermitage of sage Valmiki. Lakshman personally escorted her to the hermitage, where the sage received her with great respect. The elderly lady-hermits lovingly cared for her and helped her in raising her sons. In this way, Lord Rama indirectly protected his wife by keeping her in the shelter of sage Valmiki, whose hermitage was within the kingdom.

Lord Rama continued to love Sita: As a king, Lord Rama was expected to perform sacrifices for the state’s welfare and the ceremony mandated one’s wife to accompany the performer. When the priests advised Lord Rama to remarry, he respectfully refused though it was a common tradition then for kings to have many wives; his father King Dasarath had 300 wives. Instead Lord Rama honored his promise to Sita that she would be his only wife. Thus he made a golden image of Sita to sit beside him to meet the traditional requirements of the sacrificial ceremony and proclaimed that he still considered Sita as his beloved wife.

When Shurpanaka proposed to Lord Rama for marriage, he responded jokingly: “I am already married to Sita and I vowed not to marry more than once. You could marry my younger brother Lakshman.” Following Lord Rama, Lakshman also joked: “By marrying me, you will become the maid servant of Sita as I am dependent on my elder brother Rama.” Soon realizing the play of the two brothers, Shurpanaka decided to devour Sita who was the cause of her distress. Lord Rama, seeing the impeding danger to his wife Sita, instructed Lakshman to punish her. Lakshman instantly chopped off her nose and the embarrassed Shurpanaka left.

It was a common practice in those days to punish an aggressor by either imprisoning or partially injuring him or her.

Shurpanaka’s story, however, did not end here with the chopping of her nose. Lord Rama, in his next incarnation as Lord Krishna, fulfilled her innocent desire to love him. According to Brahma Vaivarta Purana, Shurpanaka later performed penance to achieve Lord Rama as her husband in her next birth. When Lord Rama came as Lord Krishna, Shurpanaka took birth as Kubja, the hunch-backed woman. Lord Krishna straightened her up by making the stoops on her back disappear; he made her beautiful by his divine touch.  He then visited her house to reciprocate with her love. Lord Rama thus satisfied Shurpanaka’s desire to love him.

Take me to the course!

3. Lord Rama, like a coward, killed Vali unfairly, from behind

Vali, on the verge of death, questioned Lord Rama’s action, “How could you shoot at me from behind?”  Lord Rama replied, “The younger brother should be regarded as one’s own son, and his wife as one’s daughter-in-law. You sinned by unduly trying to kill your brother Sugriva and by cohabiting with his wife Ruma. The scriptures prescribe death as the punishment for such an aggressor.” On hearing Lord Rama’s explanation and sweet voice, Vali felt remorse and realized his mistake. This shows that Vali was not an evil person like Ravana; his extraordinary power simply went into his head. But Lord Rama’s words purified him and brought forth his natural devotion. Vali thus said, “My dear Lord, it is my great fortune to die in your presence. It is perfection of my life.” He further instructed his son Angada and his brother Sugriva to be devoted to Lord Rama. This transformation of Vali demonstrates his conviction in the righteousness of Lord Rama.

Still we may have the question: Why Lord Rama killed Vali from behind? Why didn’t he confront Vali in a fair battle? This has been explained by the subsequent retellings of Ramayana. Vali, because of his penance, was blessed by the gods that whenever he fought with anyone, half of his opponent’s power would come to him. Thus logically, Vali was unsurmountable in any fair duel. Lord Rama could have easily invalidated this boon, and defeated Vali in battle. Instead he preferred to honor the benediction of the gods; and that meant he had to kill Vali without confronting him face to face. Thus Lord Rama risked his own reputation to honor the words spoken by the gods.

Performance of penance in itself is not a pious activity. What matters is the motivation with which the penance is performed. Even Ravana did a lot of penance, but his motivation was to cause harm to the innocent. Similarly even Shambuk’s intention behind his austerity was not virtuous.

The story of Shambuk begins with a brahmin coming to the court of Lord Rama with a complaint. The brahmin accused Lord Rama for the untimely death of his son. In those days, the death of the son before the father was unheard of, and the king was held responsible if such natural laws were disrupted. Such discrepancies occurred only when something irreligious was happening in the kingdom. Immediately Lord Rama set out to search for the cause of this calamity. On seeing Shambuk performing severe penance, Lord Rama enquired his motivation. Shambuk revealed that he wanted to usurp the position of Indra, the king of heaven. Lord Rama, seeing his wrong motivation, understood him to be the cause of disruption of natural order of things in his kingdom, and thus beheaded him. And instantly, the dead son of the brahmin became alive. Thus Lord Rama, through this incident, taught that penance without virtue is harmful to the society.

This incident of sudra Shambuk has also been misinterpreted to blemish Lord Rama as a casteist. If Lord Rama was a casteist, why would he accept the service of the forest dweller Guha who was considered an outcaste by social standards? Why would he accept the berries from Shabari, who was also considered an outcaste? Both Guha and Shabari approached Lord Rama with love and devotion, and Lord Rama reciprocated with their motivation, not caring for their social status.

5. Lord Rama put his wife Sita into distress by accepting to live in exile in the forest

When Lord Rama informed Sita about his father’s order, Sita became dumbfounded. Lord Rama asked Sita to stay back in the kingdom and take care of his parents. Sita wasn’t as upset with Ram’s decision to follow his father’s wish, as much as she was with Lord Rama’s desire to go to the forest alone, leaving her behind. She wanted to share her husband’s fortune in all circumstances. She considered the palace to be as good as hell in the absence of her righteous husband Lord Rama.

Sita was also fond of the country; she looked forward to associate with Lord Rama amid the beautiful mountains and lakes. She reminded Lord Rama of an astrologer’s prediction that she would one day live in the forest. Lord Rama warned her of the wilderness of the dense forest – the fierce beasts, rugged forest paths, stinging bushes, poisonous snakes, and furious winds – but she remained determined to accompany him.

Sita even taunted Lord Rama,“Has my father Janaka married me to an impotent person?” Finally, Lord Rama relented, and took Sita with him.

Kaikeyi, the favourite queen of Dashrath, demanded two boons from the King, “Firstly, coronate my son Bharat as the king of Ayodhya, and secondly, send Lord Rama on exile to the forest for 14 years.” When Lord Rama was informed of this, he did consider its implications upon the citizens of Ayodhya. After careful analysis he concluded  that Bharat was fully qualified to rule the kingdom; taking the orders of his father upon his head, he left for the forest.

Lord Rama’s acts of sacrifice are exemplary, but also extreme. They are hard to imitate, but we can derive inspiration from them even today.

You may find this interesting: Bhagavad Gita for Gens X, Y, & Z – an Online Crash Course