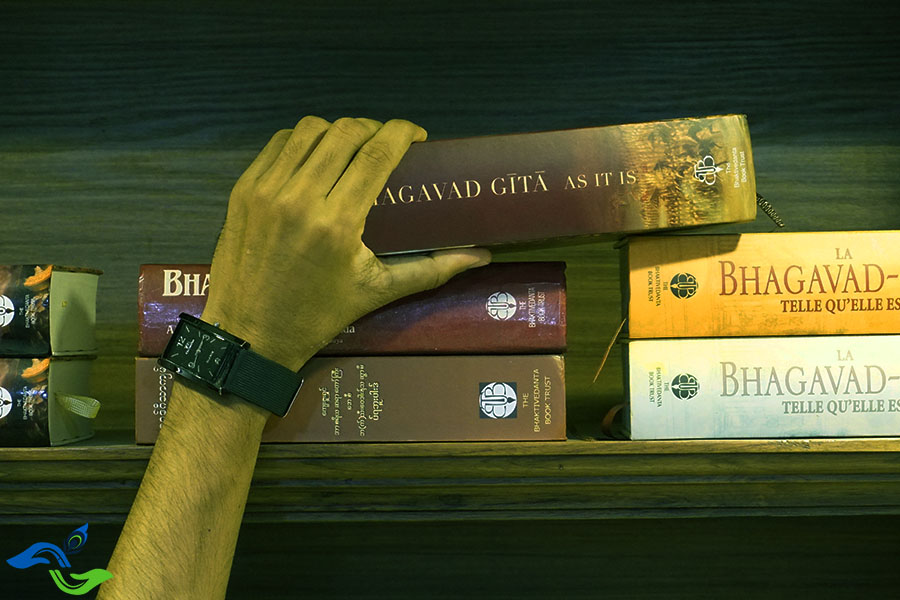 What is Bhagavad Gita?

Bhagavad Gita, ‘The Song of God’, contains the teachings of Sri Krishna. In 700 beautiful verses, Sri Krishna presents the gist of the voluminous Vedas. If we had to choose a single book to represent the spiritual and cultural traditions of India, it would certainly be the Bhagavad Gita.

This theological and philosophical treatise comes in the form of a dialogue between Sri Krishna and the warrior prince Arjuna, just before the devastating Mahabharat war between the Pandavas and the Kauravas. All the world’s armies had gathered at the battlefield of Kurukshetra to take sides in this fratricidal conflict.

Arjuna fell into a state of grief foreseeing the massacre about to take place. Reluctant to shoot his weapons at his family members, friends and teachers, he decided to relinquish the war altogether. In this moment of crisis, Arjuna turned to his friend and charioteer Sri Krishna for counsel. Thus the Bhagavad Gita was spoken.

Bhagavad Gita, for its profound wisdom and insight, has been highly recognized by eminent scholars, scientists and philosophers:

In the morning I bathe my intellect in the stupendous and cosmogonal philosophy of the Bhagavad Gita, in comparison with which our modern world and its literature seem puny and insignificant. – Henry David Thoreau, American author and historian

When doubts haunt me, when disappointments stare me in the face, and I see not one ray of hope on the horizon, I turn to Bhagavad Gita and find a verse to comfort me; and I immediately begin to smile in the midst of overwhelming sorrow. Those who meditate on the Gita will derive fresh joy and new meanings from it every day. – Mahatma Gandhi, Indian freedom fighter and politician

I owed a magnificent day to the Bhagavad Gita. It was the first of books; it was as if an empire spoke to us, nothing small or unworthy, but large, serene, consistent, the voice of an old intelligence which in another age and climate had pondered and thus disposed of the same questions which exercise us. – Ralph Waldo Emerson, American writer and poet

Even the Vedas and the great spiritual teachers have glorified Bhagavad Gita. In the Padma Purana, Lord Siva speaks the glories of the Bhagavad Gita to his consort Parvati and this conversation is recorded as Gita Mahatmya:

If one properly follows the instructions of Bhagavad Gita, one can be freed from all miseries and anxieties in this life, and one’s next life will be spiritual. – Gita Mahatmya 1

If one reads Bhagavad Gita very sincerely and with all seriousness, then by the grace of the Lord the reactions of his past misdeeds will not act upon him. – Gita Mahatmya 2

One may cleanse himself daily by taking a bath in water, but if one takes a bath even once in the sacred Ganges water of Bhagavad Gita, for him the dirt of material life is altogether vanquished. – Gita Mahatmya 3

This Gitopanishad, Bhagavad Gita, the essence of all the Upanishads, is just like a cow, and Sri Krishna, who is famous as a cowherd boy, is milking this cow. Arjuna is just like a calf, and learned scholars and pure devotees are to drink the nectarean milk of Bhagavad Gita. – Gita Mahatmya 6

Let a man read but a little from the Bhagavad Gita, drink just a drop of water from the Ganga, worship Murari (Krishna) just once. He then will have no altercation with Yama (the lord of death). – Text 21, the famous song bhaja govindam

Take me to the course!

What is the essence of the teachings of Bhagavad Gita?

Beyond the myriad of identities we assume in this world, based on gender, caste, race, religion, nationality, and so on, Bhagavad Gita explains that we are ‘indestructible’ spirit souls encaged in temporary material bodies, suffering due to forgetfulness of our pure spiritual consciousness. The Bhagavad Gita is like a manual that teaches us how to revive our pure spiritual consciousness, which is full of uninterrupted happiness, through the process of yoga.

The Sanskrit word yoga comes from the root word yuj – ‘to connect’. Yoga is the process of connecting with the Supreme, Sri Krishna. The Bhagavad Gita explains four types of yoga: karma-yoga, jnana-yoga, dhyana-yoga and bhakti-yoga.

Bhagavad Gita(6.47) states that among the above four, bhakti yoga is the culmination of all yoga practice and the most effective means to revive our pure spiritual consciousness because it directly connects us with the Supreme, Sri Krishna.

What are the main topics discussed in the Bhagavad Gita?

Is the Bhagavad Gita relevant for me?

Do you feel confused, dejected and helpless in trying situations such as failure in career, loss of a dear one, health crisis, interpersonal conflicts and so on? If no, you must either be a crazy person or a self-realized soul. If yes, you are a normal human for whom Bhagavad Gita is highly relevant. But why?

Arjuna, while in a state of confusion due to a trying situation, turned to Krishna who in response spoke the wisdom of Bhagavad Gita. After the entire conversation, Arjuna stated: “O Krishna, my illusion is now gone. I am free from doubt and firmly situated. Now I am prepared to perform my duty as per your instructions.” The Bhagavad Gita thus equips us with the wisdom and courage to cope with the inevitable challenges of our day-to-day lives. It is not an arm chair philosophy. The dramatic setting of a battlefield, wherein the Gita was spoken, indicates that it is meant for practical application.

The Gita says that our life is also like a battlefield where in we need to constantly fight with an enemy within. What’s that enemy? It is the ignorance of our real self, the spirit soul. This ignorance is the root cause of all our suffering in this world.

Can the message of Bhagavad Gita make the world a better place?

Think for a moment: “What has made the world a filthy place to live in?” Is it lack of sufficient food to eat, clothing to wear or a house to stay? Or is it a result of the growing selfish greed amongst humans.

There’s enough in this world to meet everyone’s need, but not enough to meet even one person’s greed. – Mahatma Gandhi

The real problem is not lack of resources, but a dearth of character amongst humans. Bhagavad Gita thus creates a strong spiritual foundation for building our character. It essentially changes our world view. In the following video, Radhanath Swami, a spiritual leader, explains three basic views of the world (which includes the Gita view):

To the extent people accept the Gita view, they shall automatically become a part of making the world a better place.

Which edition of the Bhagavad Gita should I read?

According to the Bhagavad Gita, one should learn spiritual knowledge from a guru.

The guru should belong to an authorized lineage (parampara or sampradaya). As per the Padma Purana, there are four bona fide sampradayas that begin with Vishnu himself.

The most widely-read edition of Bhagavad Gita, Bhagavad Gita as it is, is translated and commented by Srila A.C. Bhaktivedanta Swami Prabhupada who comes in the lineage of Brahma Sampradaya. This edition has been translated into more than 50 languages across the world.