How a Beginner Should Approach Bhagavad Gita 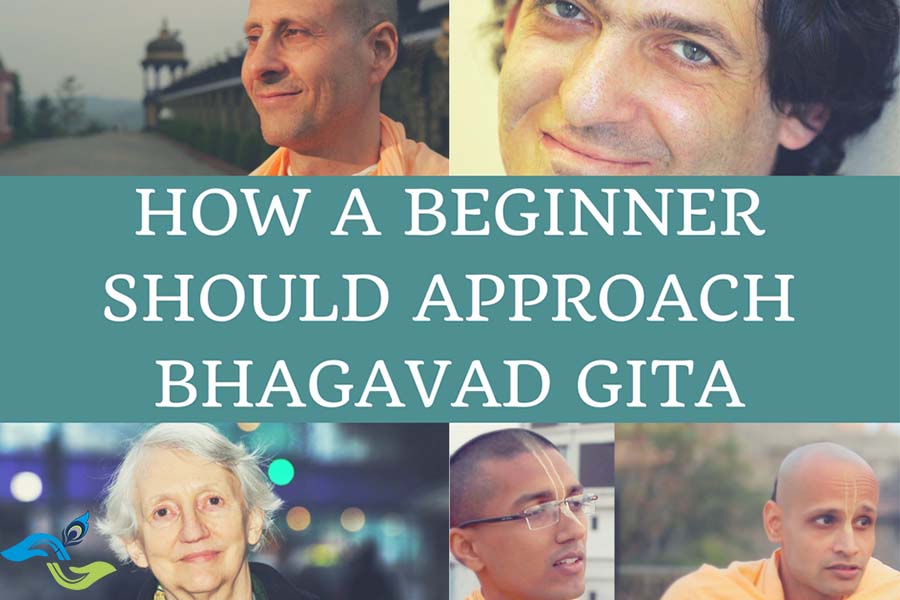 How a Beginner Should Approach Bhagavad Gita

Your attitude plays a critical role when you turn to spiritual sciences like Bhagavad Gita. The above video explains – with sound logic – the attitude in which a beginner should approach Bhagavad Gita. What follows is a transcript of the video with relevant links placed in-between:

How to check the trustworthiness of Bhagavad Gita

Gopinath Chandra: To get the most out of your Bhagavad Gita study, you should approach the Gita with Shraddha. Shraddha means an attitude of trust. Because a little trust is needed for us to start applying the principles taught by the Gita, and that application leads to experience. And that experience leads to more trust and then the cycle continues. So to start the cycle we need a reasonable amount of trust.

Onara O’Neill: And I think that judgment requires us to look at three things. Are they competent? Are they honest? Are they reliable? And if we find that a person is competent in the relevant matters, and reliable and honest, we’ll have a pretty good reason to trust them, because they’ll be trustworthy.

Is the Bhagavad Gita competent?

Vidagdha Madhav: The same principles can be applied even to judge the trustworthiness of Bhagavad Gita. So is the Bhagavad Gita competent? Well, yes. The very fact that it has been used as a self-help book for centuries shows how competent it is. But the most important thing here is to understand very clearly in which area you can trust the competence of Bhagavad Gita.

Onara O’Neill: I might, for example, say that I certainly trust a certain elementary school teacher I know to teach the reception class to read, but in no way to drive the school minibus. I might, after all, know that she wasn’t a good driver. I might trust my most loquacious friend to keep a conversation going but not — but perhaps not to keep a secret. Simple.

Vidagdha Madhav: The competence of the Bhagavad Gita is in the field of transcendence. The Gita teaches us how to transcend the world while being a part of this world.

Gopinath Chandra: The field of transcendence has its own set of axioms, just as modern science has.

Now, what’s an axiom? An axiom, by definition, is a statement that is taken to be true, to serve as a premise or starting point for further reasoning and arguments.

For example, there are axiomatic truths in mathematics. You can’t prove them, but you will have to accept them, in order to move ahead to higher levels of mathematics.

Similarly, there are axioms in the Gita. The laws of karma, the concept of the 3 gunas. You will have to accept these axioms to move ahead to higher levels of transcendence. And when you experience a transformation in your own life by moving to higher levels of consciousness, you kind of automatically find the proof of those axioms yourself.

Is the Bhagavad Gita reliable?

Vidagdha Madhav: The second criterion to judge trustworthiness is reliability. Alright, something is competent, but can I rely on it? Will it work with me?

Gopinath Chandra: The association of people who practice Bhagavad Gita will help you understand that Bhagavad Gita is reliable. For example, in our ashram I live with people who have been practicing the principles of Bhagavad Gita for different durations of time — some for a decade, some others for 2 decades, and some even for 3 decades. So seeing them, I understand that Gita works. And I can get an understanding of what transformation I can expect as time progresses. But it’s not that you have to live in an ashram to gain trust in the Gita, but it is important to be connected to people who are seriously putting the Gita in action in daily life. And it’s important to have the guidance of a guru, who can help make the Gita relevant in your life.

Is the Bhagavad Gita honest?

Vidagdha Madhav: The third criterion to judge trustworthiness is honesty. If one person who professes to be a follower of the Bhagvad Gita, or worse, professes to be a teacher of Bhagavad Gita, and he or she violates the principles of good behaviour — honesty and integrity, it seriously breaks the trust of people in Bhagavad Gita.

Dan Ariely: Let’s say you have 10 people. Every morning they get $10. Either they can keep the money for themselves, or put it in a central pot. If the money is put into a central pot, it is multiplied 5 times, and then equally divided by everybody.

First day everyone wakes up, they get $10. They put money in the central pot; the money gets multiplied 5 times and becomes $500. In the evening it is equally divided between the 10 people: each gets $50. Everybody is happy.

One day one person decides not to put their money in. 9 people put $10 each into the central pot; the money gets multiplied 5 times and becomes $450. The money gets equally divided among 10 people. Everyone gets $45, except the one person who betrayed the trust. That person gets $45+$10 = $55.

Gopinath Chandra: As a teacher of the Bhagavad Gita it’s my responsibility to live a life of honesty and integrity.

At the same time, as a seeker it’s important for you to be aware of how fragile your trust is when confronted by dishonest behaviour. So be careful not to fall into the trap of losing trust altogether by seeing some dishonest practitioners or teachers of the Bhagavad Gita. Let’s focus on the positive examples .There have been so many saints in history, and even today there are so many, who have lived and who are living an exemplary life of selfless service based on Bhagavad Gita. Mahatma Gandhi is one example that quickly comes to mind.

Vidagdha Madhav: So yes, Bhagavad Gita is an absolutely brilliant literature that can completely transform our life, provided we approach it with an open mind, and an ample amount of trust, sufficient for us to seriously start applying its teaching in our life. And once we start applying, it’s self-propelling, because the results we gain will deepen our trust.